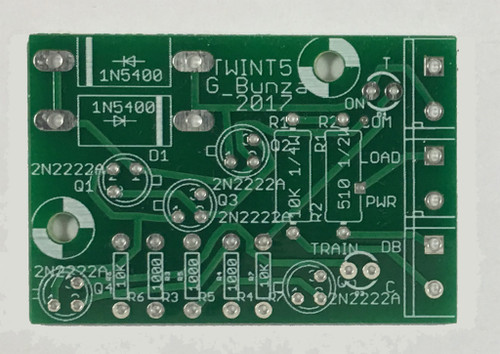 The  Improved Twin T DC Detector is a Geoff Bunza Design.  Geoff published this in his column in MRH as SMA26and documentation can be found in the article.  Geoff provides design information including Gerber files, so you can easily have your own boards made, but we keep bare boards in stock and sell them in quantities as small as one, where economic orders at the board vendors usually require the purchase of several boards.

"Recently, I had an impassioned request for help with block detection on a DC layout, with a specific request to use the “venerable” Twin-T detector circuit. It led me down a path that I did not expect, and to this report, that may be of interest to modelers. The recent request for help noted that the Twin-T circuit lit its indicator when the block was empty (original variation), and that needed to be reversed. Further, this need to operate multiple remote panel, block occupancy LEDs, have a local on-board, occupancy LED for testing, and also indicate when power was connected and “ON.” It also needed to be easy to build and low cost. Glossing over the multiple versions that were rejected, the Twint4 was built."  (Read more)

This product hasn't received any reviews yet. Be the first to review this product!